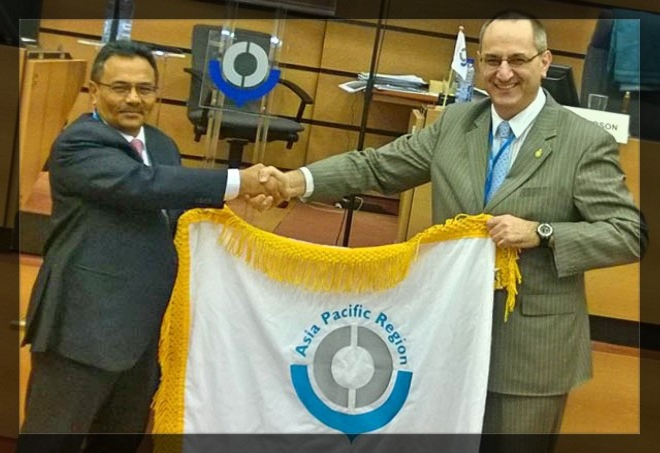 The flag of the WCO Asia/Pacific Vice-Chair was handed over by the CEO of Australian Customs Border Protection Services (ACBPS), Mr Michael Pezzullo to the Director General of Royal Malaysian Customs Department (RMCD), Dato’ Sri Khazali bin Hj. Ahmad. RMCD will hold the vice-chair post for a two year period starting from July 2014.

In his acceptance speech, Dato’ Sri Khazali recalled that this would be the second time for Malaysia to hold the WCO Asia/Pacific Vice-Chair post after her first appointment from 1994 to 1996. He stressed that although this time the challenges would be greater, Malaysia would be able to perform her role and responsibilities effectively with the continuous support of the region’s members, Regional Offices for Capacity Building (ROCB), Regional Intelligence Liaison Offices (RILO) and Regional Training Centres (RTCs).

He further emphasized that the Vice-Chair has a massive obligation to administer the continuous implementation of the new Regional Strategic Plan, harmonizing work on regional priorities and emerging issues, whilst not neglecting capacity building needs of all Members in the region.

Concluding his remarks, he conveyed appreciation to the Australian Customs and Border Protection Services (ACBPS) for successfully accomplishing its tenure as the Vice-Chair and requested for the members’ continuous support and assistance, in performing Malaysia’s role as the WCO Asia/Pacific Vice-Chair.