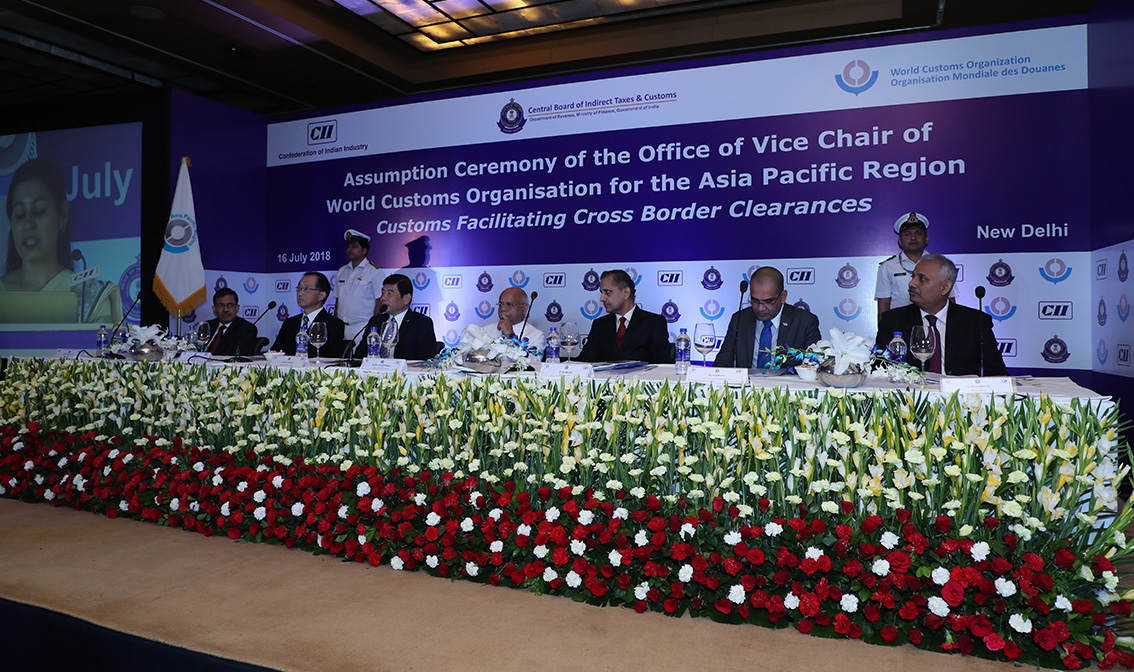 To mark the assumption of Vice Chair of Asia/Pacific Region of World Customs Organization by India, an event was held in New Delhi on 16th July, 2018 with the theme of “Customs Facilitating Cross Border Clearances”. The ceremony was attended by delegates from 30 countries of Asia Pacific Region, Customs officers of India from different areas, Partner Government Agencies and representatives of trade and industry. Minister of State for Finance Sh. Shiv Pratap Shukla was the Chief Guest for the ceremony and WCO Secretary General Mr. Kunio Mikuriya was the Keynote Speaker.

The Minister of State for Finance, India, welcomed the dignitaries and all the foreign delegates, and confirmed his political support for the CBIC’s role as A/P Vice-Chair. He added that trade facilitation is important, but there is also need to recognize the risks, which our Customs officers have to face, while enforcing laws.

In his opening address, Mr. S. Ramesh, Chairman, CBIC India, in his capacity as the new A/P Vice-Chair, expressed his appreciation and highlighted that for the next two years, India shall have four strategic guiding principles, i.e., to have greater communication and connectivity within the Asia Pacific Region, to harness technology advancements, to adopt inclusive approach and to evolve consensus on core issues.

Delegates from Fiji, Japan and Korea congratulated India for assuming Vice Chair and appreciated India’s role and contribution at this global platform. There were also, addresses by Australia, Singapore, GATF and Private Sector on various facets of Trade Facilitation highlighting the theme of – "Customs Facilitating Cross Border Clearances".

The event was followed by a high level seminar conducted by WCO and ROCB, Thailand on the E-commerce Framework of Standards (FoS) which have been adopted by WCO Council last month. The two day seminar included fruitful deliberation on various principles of FoS like, Advance Electronic Data and Risk Management, Facilitation and Simplification, Safety and Security etc. Member countries of the Asia Pacific region, including Australia, China, Japan, Korea, Malaysia and Samoa shared their experiences in these areas.